(CNN)Almost 200,000 people joined together Sunday in Spain’s Basque Country to create a 202-kilometer (125-mile) human chain to make the case for having a vote on independence.

The chain was organized by the Basque group Gure Esku Dago (In Our Own Hands), and stretched from the seaside resort of San Sebastián west to the city of Bilbao and then south to Vitoria, the home of the Basque parliament. With 175,000 participants, according to Gure Esku Dago, the group almost doubled the 100,000 it said it would need to link the chain. 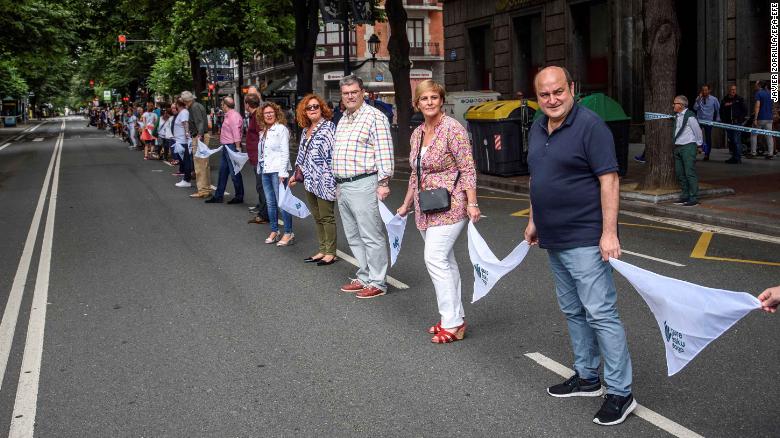 Basque Nationalist Party’s senior officials Andoni Ortuzar (right to left) and Itxaso Atutxa and Bilbao Mayor Juan Mari Aburto take part in the human chain in Bilbao, northern Spain.
«The need to decide here in the Basque Country is what has brought together more than 175,000 people today. We are not afraid of freedom. The future is in our hands. Gure Esku Dago! #BasquesDecide,» Gure Esku Dago wrote in a Facebook post.
The chain wasn’t strictly about the right to vote for independence. It was also about the right of governance, and importantly, the right of Basques to control their pensions. Organizers drafted a document including 2019 reasons defending their right to decide the independence of the Basque Country. The document was handed to the Basque Parliament in Vitoria.
The Spanish constitution, which was ratified in 1978 after the regime of dictator Francisco Franco, states that Spain is both «common and indivisible» and maintains that any independence ballot is illegal. 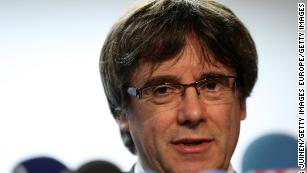 Protests break out after Catalonia ex-leader Carles Puigdemont detained
The harsh legal crackdown last year in Cataloniaunderlined the broad authority Madrid has to stamp out any full-fledged independence movement in order to keep Spain intact.
The Basque Country is already one of the most autonomous regions in Spain, having its own police force, education system, language and fiscal agreements, according to Reuters. According to the Euskobarometer, a survey conducted by the University of the Basque Country that measures different levels of sentiment, 23% of Basques felt like they were more Basque than Spanish, and 35% felt they were entirely Basque. 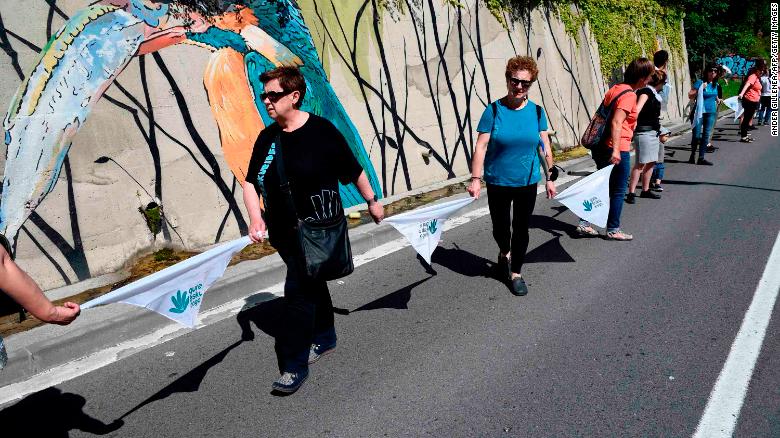 People take part in the human chain in San Sebastián.
However, only 23% of Basques would vote for independence while 43% would vote against it, according to a separate study carried out by the Bilbao-based University of Deusto. Nonetheless, many Basques — almost 40% — would like to have even more autonomy and believe they should have the right to vote for independence, according to the study.
The human chain comes a few months after ETA — the Basque separatist group that killed around 850 people in its half-century campaign for independence — formally disbanded in April. The group sent a letter to various governmental institutions and media agencies in which it apologized to the families of the victims and accepted «direct responsibility» for its crimes. 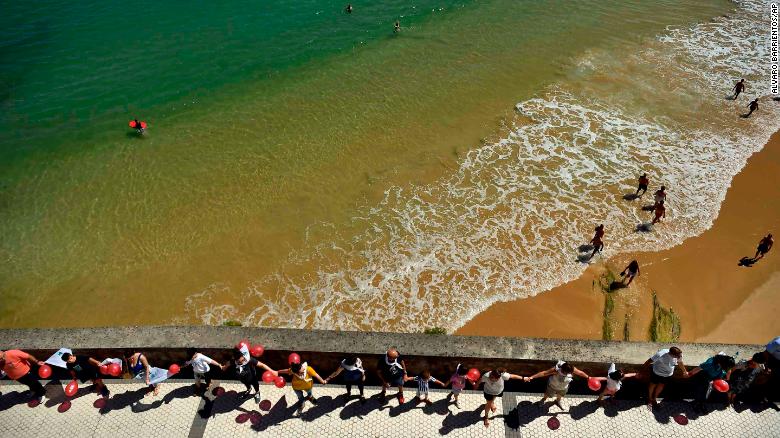 People gather along San Sebastián’s La Concha beach as part of the independence demonstration.
Pedro Sánchez, who recently became Spain’s new Prime Minister after replacing Mariano Rajoy after a no-confidence vote, in the past has called for more autonomy for the Basque Country. Rajoy was criticized for his harsh response to the independence vote in Catalonia, which included the use of Spanish national police to suppress voting and the dissolution of the Catalan parliament.
The Basque Nationalist Party initially supported Rajoy, but then ultimately voted for the no confidence motion, which ousted Rajoy from office, making way for Sánchez to become prime minister.

WTFPL – Do What the Fuck You Want to Public License